The new year is officially well under way on the farm, and the cows seem to be celebrating by bringing new life into the world a little earlier than we had expected! So far two calves have been born. Either we got our math mixed up or (more likely) they’re both about two weeks early. 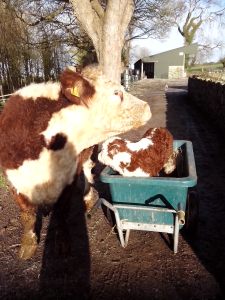 Mummy and baby being moved to the ‘maternity ward’ to get a bit of peace from the herd.

The two calves are up and drinking, which is the most important part of the operation. Vets say now that it’s vital that calves get colostrum or beestings within the first six hours of being born. Usually calves manage to do this by themselves but sometimes they need a helping hand or push to differentiate their mother’s shoulder from her udder. Once they’ve ‘latched on’ you can leave them to it! It’s going to start feeling like an episode of ‘Call the Midwife’ on the farm soon!

In love with gardening

Rambling in the Garden

Travel Tales With A Twist

The universe is a big place, perhaps the biggest.

Notes from a wildlife-friendly cottage garden

Gardening in a Gale

Somewhere between the notes.

The ramblings of an adult learning the piano

Small-Scale Smallholding, A Tiny Farm In A Big Garden

Out of my shed
wellywoman

A Life in Wellies

my mother raised the perfect housewife...then I went to med school